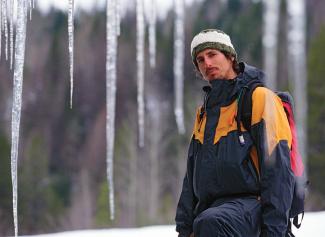 Craig was known as a world champion. A legendary snowboarder. The Master. An Icon.

After nearly 15 years of hotel rooms, trains, planes, and automobiles. From Greenland to Chile and everything in between. Craig Kelly to me was a confidant, a brother, and a friend.

To me, he was “Smelly Kelly” who never used deodorant. He always farted when he woke up in the morning. I could never turn my back on him because he was a trickster. He introduced me to avocados and he loved eating butter tarts when he came to Canada.

One time when he returned to Fernie after a trip to Japan, he walked in the door and I said, “How was Japan?”. He said, “You treat me like a rock star, I’ll act like a rock star”, and that was it. We just went up to Island Lake and did our thing. He breathed easy and was content. He was back where he belonged.

His transition from competitor to backcountry soul rider was natural. I think an important element of his plan was to find balance between making a living and managing his public image. Island Lake was the perfect platform for his transformation. In interviews, he often talked about balance in his riding but balance in everything was paramount for him; a life lesson he continues to teach me today.